In Artology, Malevich states that the content of Italian Futurism is dynamism, hence artists’ sensation was the dynamic, and he devotes a chapter to this subject matter, Dynamic and Kinetic Futurism. There were those artists, however, who were part of that movement but whose works were closer to Cubist structure, having only “a certain nuance of unrest”, as he put it. “Therefore, I think that we should single out such works from the Cubist system and create an intermediate ‘Cubo-Futurist’ category which has at the basis of its formation only the sickle formula and according to which law the artists strive to form dynamic sensations”, he concluded. In other words, they were working from the Cubist system of straight line and curve symbolised as a sickle, into which they would incorporate aspects of movement and, perhaps, the dynamic.

The artists considered are the Italians, Ardengo Soffici, Carlo Carrà and Gino Severini, and the Frenchman, Francis Picabia is also included. 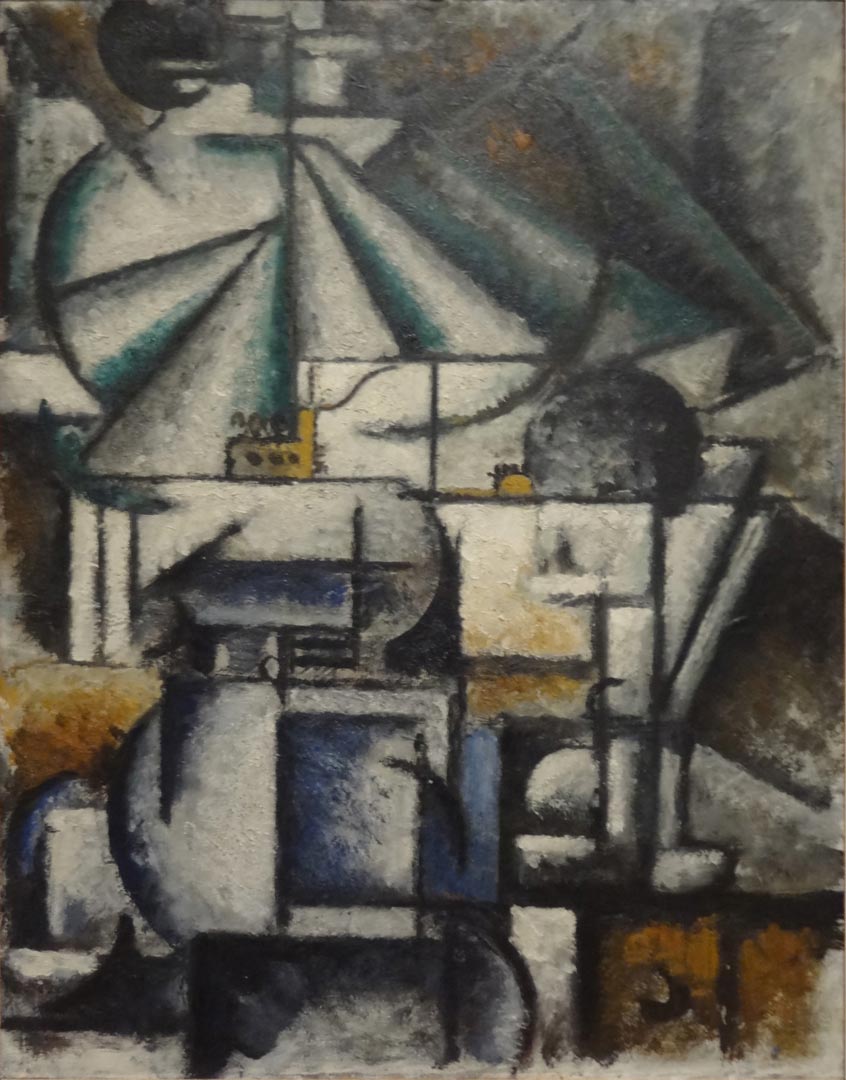 A. Soffici, Deconstruction of a Lamp, 1912
Estorick Collection of Modern Italian Art, London

Soffici’s, Deconstruction of a Lamp of 1912 has all the characteristics of the static structure of Cubism, but light radiates from the lamp and sheds brightness onto the surfaces below it. As subject matter and in its fan-like structure, light is always energy, thereby merging a Futurist element into a Cubist arrangement of planes.

In his chapter, Malevich included two paintings by Soffici whose titles begin with “Synthesis” – Synthesis of an Autumn Landscape and Synthesis of the City of Prato, both of 1913. In writing about the principle of synthesis in his Plastic Dynamism of 1914, Umberto Boccioni says that when incorporated into a painting, synthesis is a combination of memory and sensation, the past and the present, whereby time can be introduced into a work.

The structures of these two paintings are different. Prato is made up of a series of panels of the façades, interspersed with diagonal planes or arches. Photographs of Prato today, below, show what Soffici was looking at and how he juxtaposed views of the city, with their patterns of brickwork and the repetitive elements of stairs, arches, reflections and so on. He filled the space with all the closely-fitting parts of a city, while giving it the impression of being built on a hill – only the old city was high above the Renaissance city. 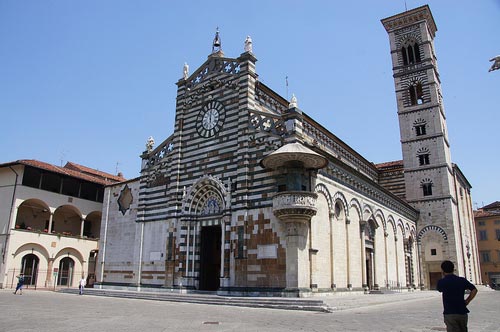 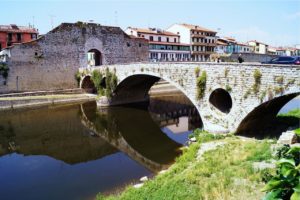 In his comments, Malevich remarks that the ordering of the elements in this painting is like that of Cubist ordering based on the contrast of the straight line and the curve, and that there is “no striving on the part of the master to introduce order into the construction of the object’s element, order which would have given us the dynamic development of the object, cast into a whirlwind of circular motion”.

This would also be true of Synthesis of an Autumn Landscape (below). Although Soffici arranged banks of elements in different directions, juxtaposing them as if they are sweeping now this way, now that, only the building in the middle is handled in a Cubist manner, the elements around it being in groups of repeated patterns but not in movement. This introduces sensations of movement in the eye or, to quote Malevich, “a certain nuance of unrest”, but the overall structure does not have a consistent dynamic arrangement. Hence for Malevich, the painting would belong to the works that are Cubist and Futurist, or Cubo- Futurist. 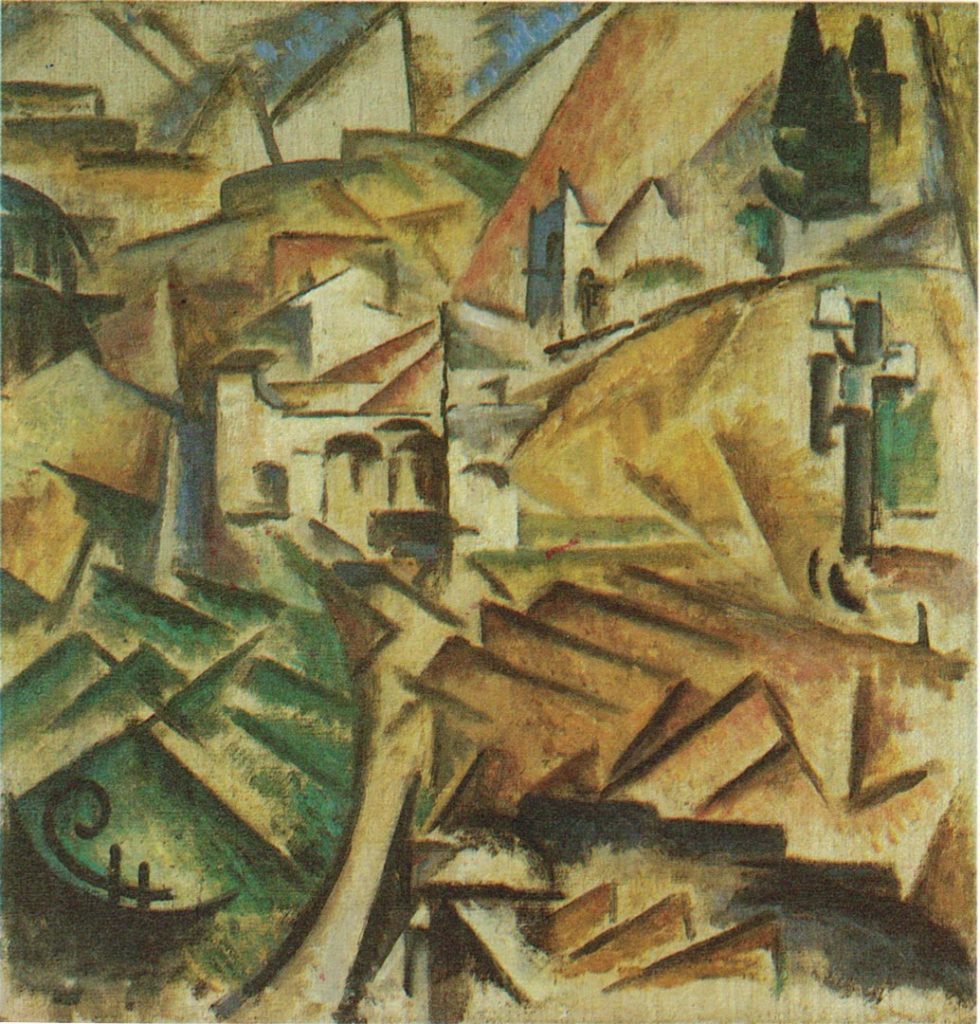 Another kind of movement can be seen in the twisting and turning of the forms in The Pederasts’ Dance (Plastic Dynamism) of 1913. The turning is not just of part-spirals on the surface of the composition but into the pictorial space, but, as Malevich points out regarding Carrà’s, Galleria of Milan (below), without an overall dynamic structure, the painting remains under the dominant influence of the Cubist manner of assembling forms based on the principle of contrast. Despite its energy, this painting is not a “dynamic reflection of the movement of forms in time”, as Malevich qualifies true Futurism. 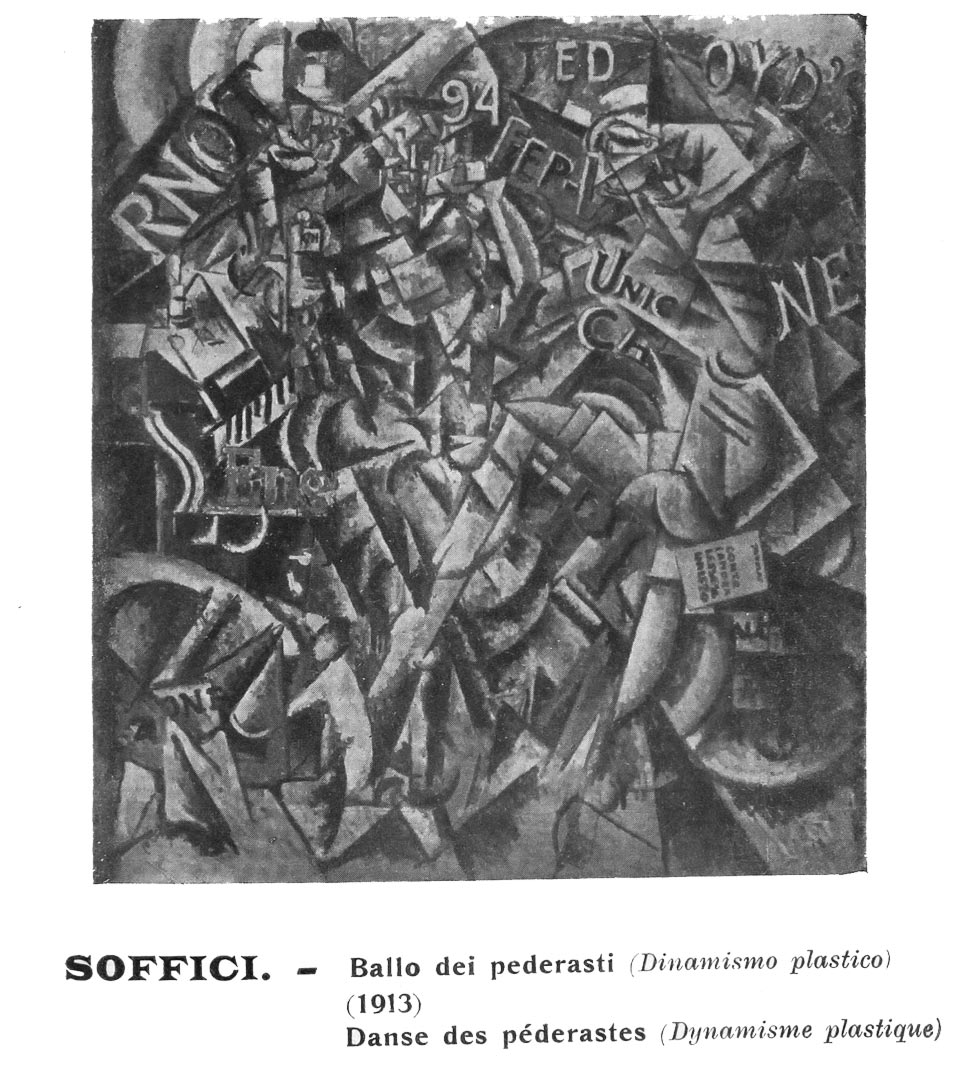 Malevich goes on to discuss the paintings of 1912 by Carlo Carrà. Although they, too, may be full of energy or even titled, Centrifugal Forces (below, lost), he describes the elements in this picture as being put together in parts. The consequence is that there is no “turbulent whirling, as a result of which the work’s structure … should have developed and created a new, dynamic, elastic form”. He also finds that both Woman + Bottle + House (Plastic Expansion in Space) and The Galleria of Milan are devoid of what makes a work truly Futurist: it must depict dynamism through the overall unifying structure of all the elements. 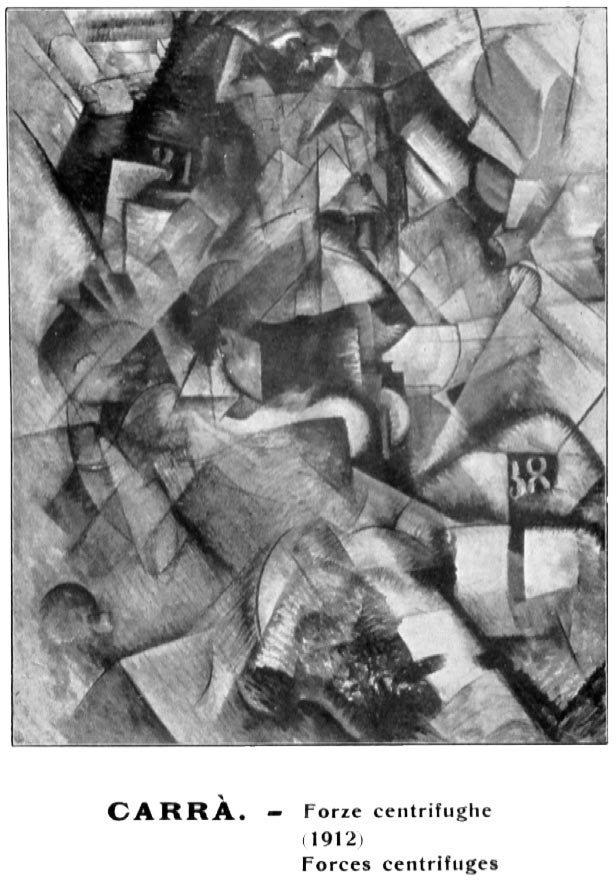 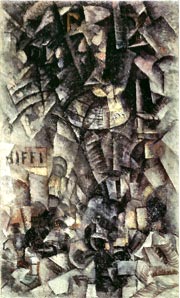 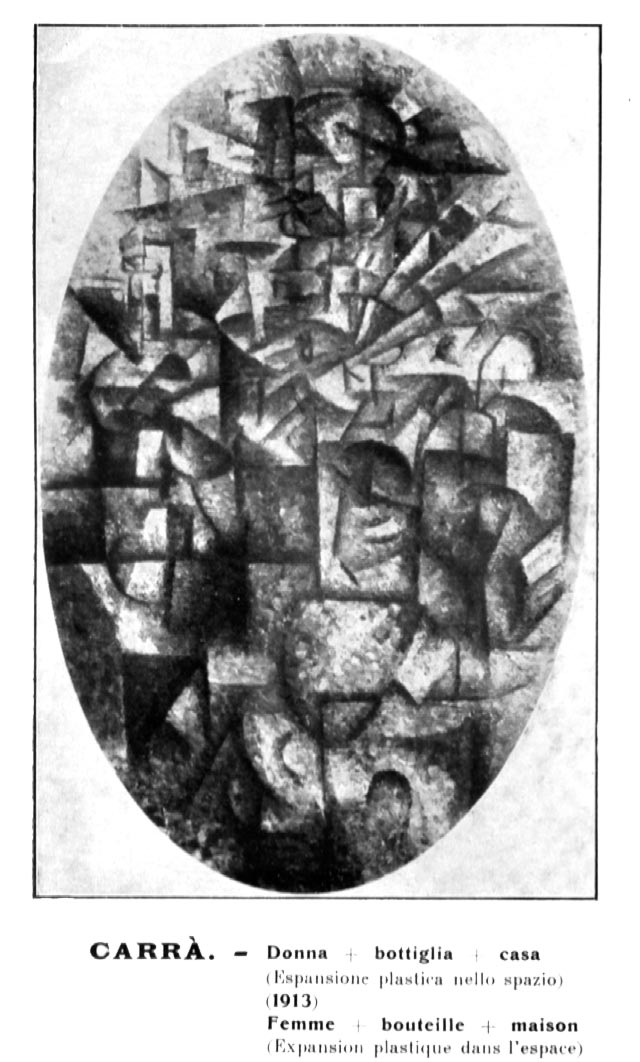 Another Italian painter whom Malevich classifies as a Cubo-Futurist is Gino Severini. His Train in a Landscape of 1913 (lost) is made up of separate elements in the Cubist manner, Malevich writes, but they are linked so as to convey a dynamic development amongst them. Severini’s earlier, The Boulevard, of 1910, however, is an assemblage of the “purely Cubist principle of contrasting displacement”, according to Malevich, rather than having been built kinetically if it were to capture the movement of the city. 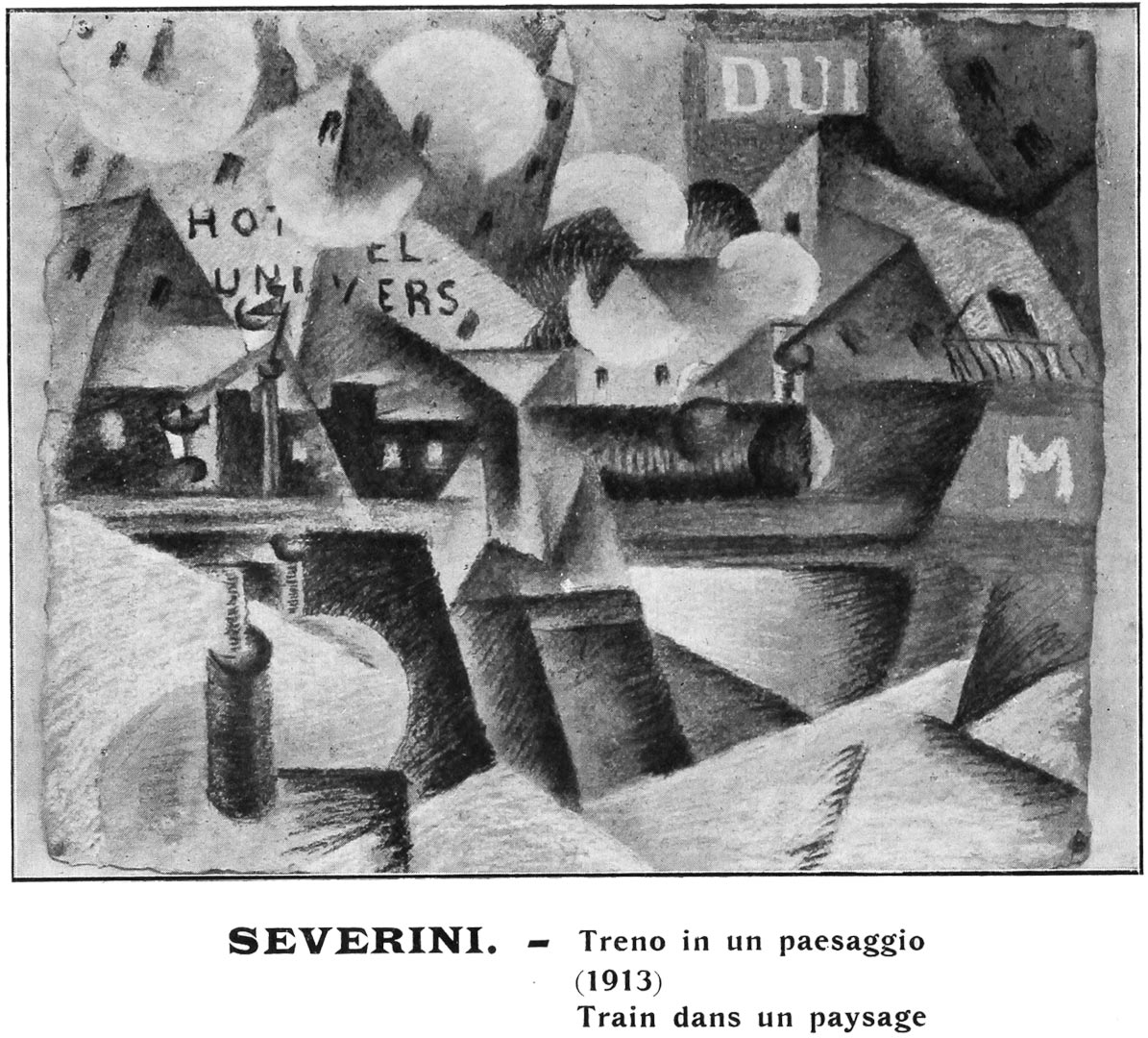 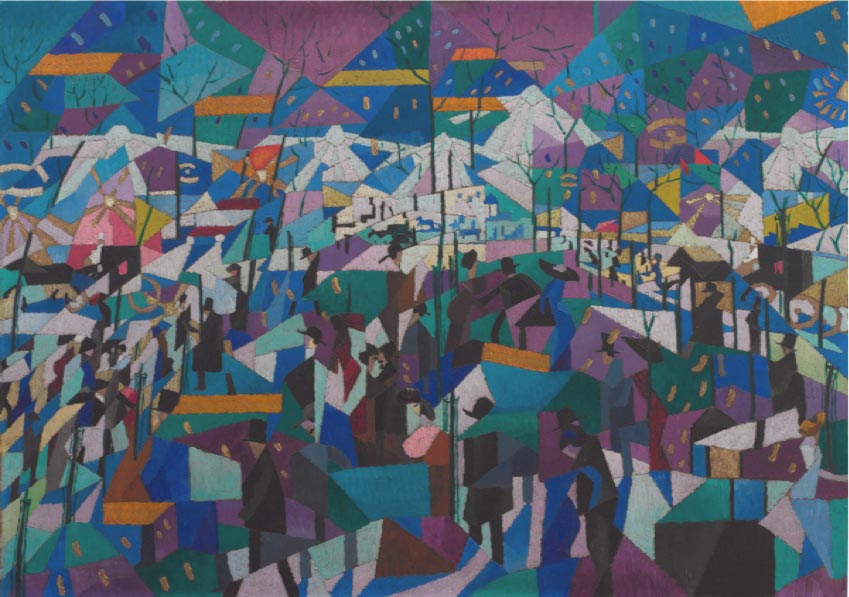 Between these two paintings there has been a clear development towards the dynamic with Severini’s 1912, Dynamism of a Dancing Woman. Here, Malevich says, a

“human being is caught up by the whirlwind of the dance. The whirlwind has reduced this being to a countless number of temporal-spatial displacements. Thus, this picture must be assigned to the Cubo-Futurist category”. Because these displacements of individual elements belong to a Cubist device, Malevich does not consider them as kinetic repetitions, which in some areas they could be. This composition is among the most dynamic of Cubo- Futurist pictures. 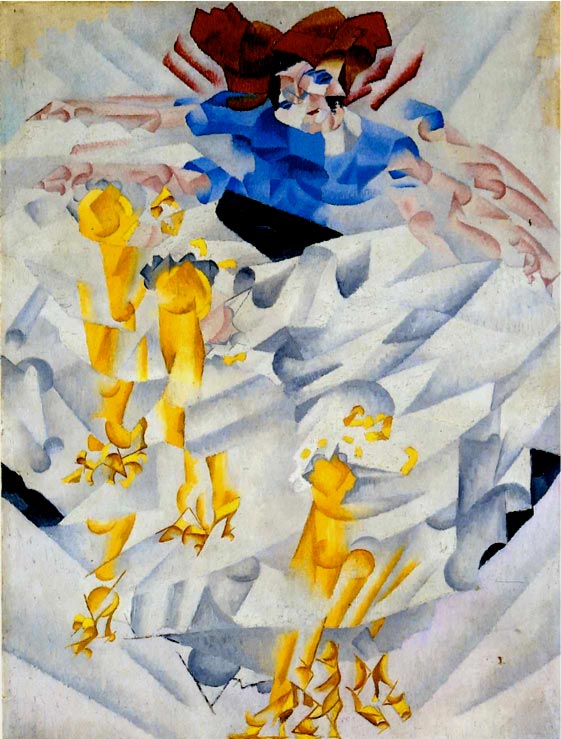 In beginning his analysis of the three paintings by Francis Picabia, Malevich asks, “what sensations make up the content of these works? It is essential that we answer these questions if we are to decide to which category Picabia belongs”. His first question concerned the artistic issue of the arrangement of the elements, and about them remarks that they “produce a pictorial, painterly rather than dynamic impression”. Malevich considers Picabia as neither Cubist nor Futurist, saying that “Picabia’s works are totally non-objective and we find not so much as a hint of an object.” Hence, Malevich concludes, the greatest significance of Picabia’s pictures lies in their artistic sensations – of colours and their relationships. His works are a “type of pure sensations” and so “must be related to a special category and, specifically, to a category of non-objective art.” And this would have been as early as 1911. 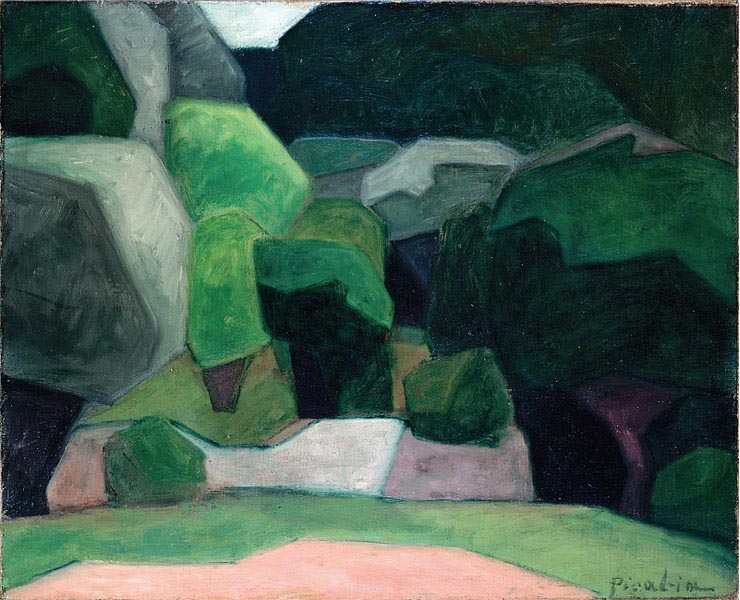 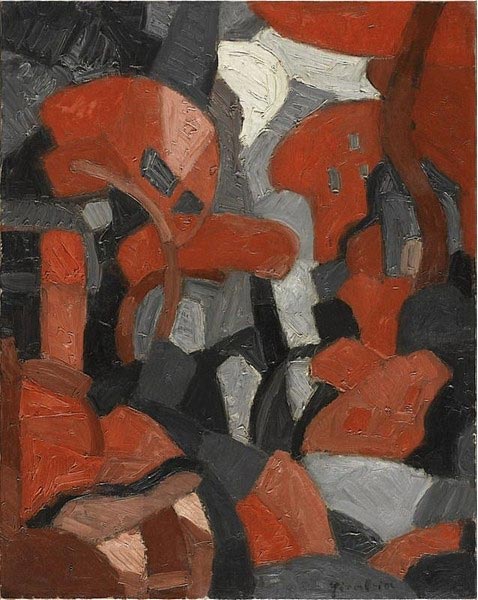 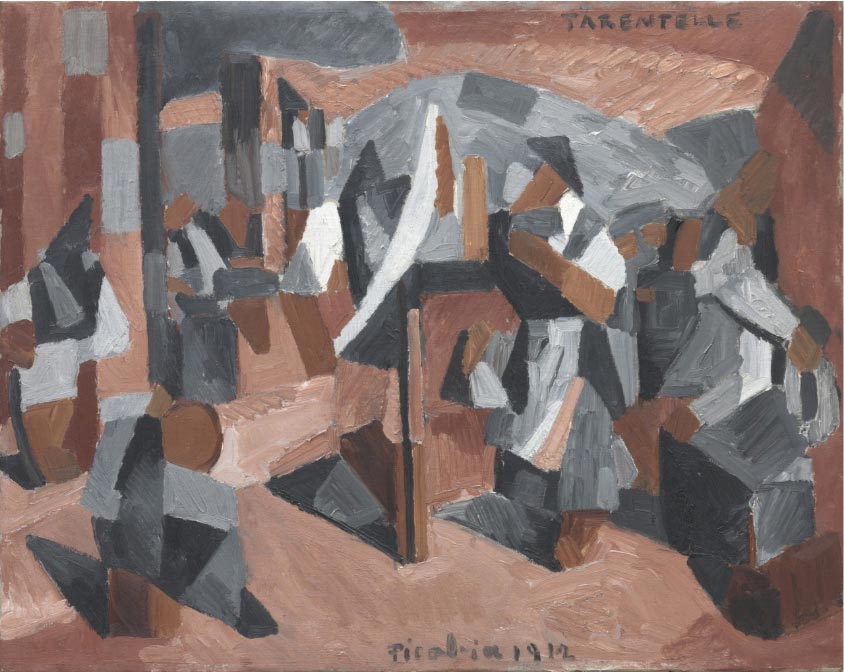 Although the term Cubo-Futurism was not part of the vocabulary used by the Italians, it was very much used by the Russian painters from around 1912 since many of them were painting in a Cubist manner to which they incorporated aspects of movement and dynamism. Indeed, Futurism in Russia had originated in literature and it had several meanings, especially a rejection of past artistic values with a simultaneous appeal to the future, to which machines and all that was new belonged. Hence appeared in painting the automobile and the bicycle, electricity and the lamp, the city and the factory, together with the use of new artistic trends, Cubist devices in particular. Thus there is Popova’s seated nude, Figure + House + Space, Udaltsova’s Seamstress, Kliun’s repetitive shapes of sounds from a gramophone, or the vibrations of Popova’s Violin, or her Study for a Portrait on which she wrote, “Cubo Futurism”, where the head is captured in several positions as it turns, light streams in from different directions, all in a basically Cubist arrangement of planes. Malevich had titled a group of works shown in the 1913 Union of Youth 7 exhibition, “Cubo-Futurist Realism” made up of a dynamic Woman Reaper, a Clock, a Lamp, and a Samovar, the latter being in the Museum of Modern Art, New York. 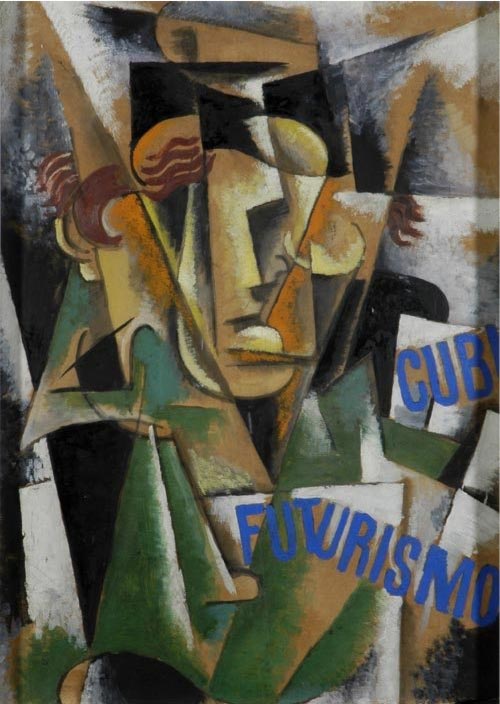 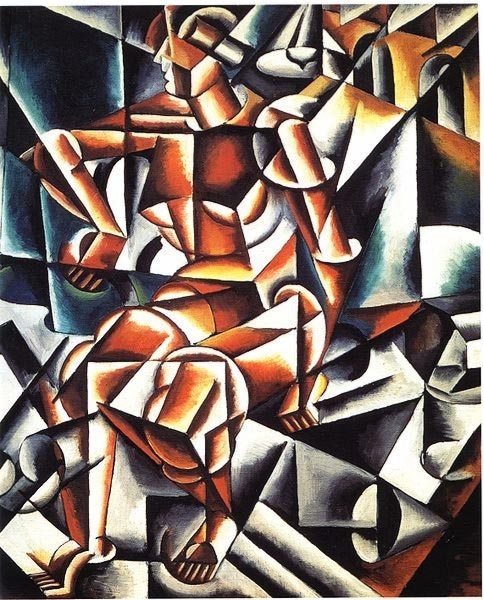 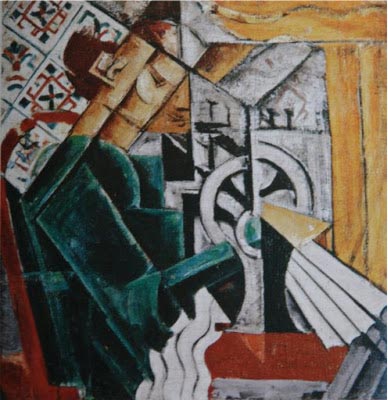 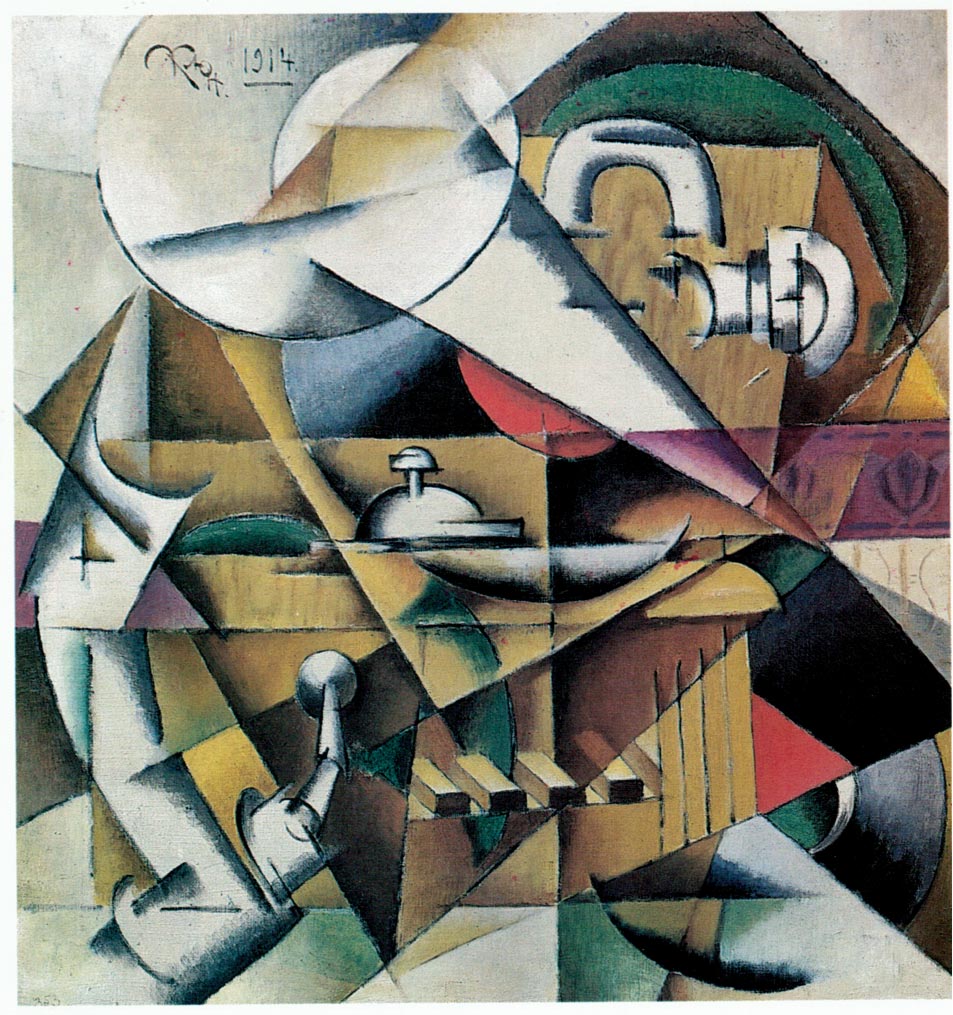 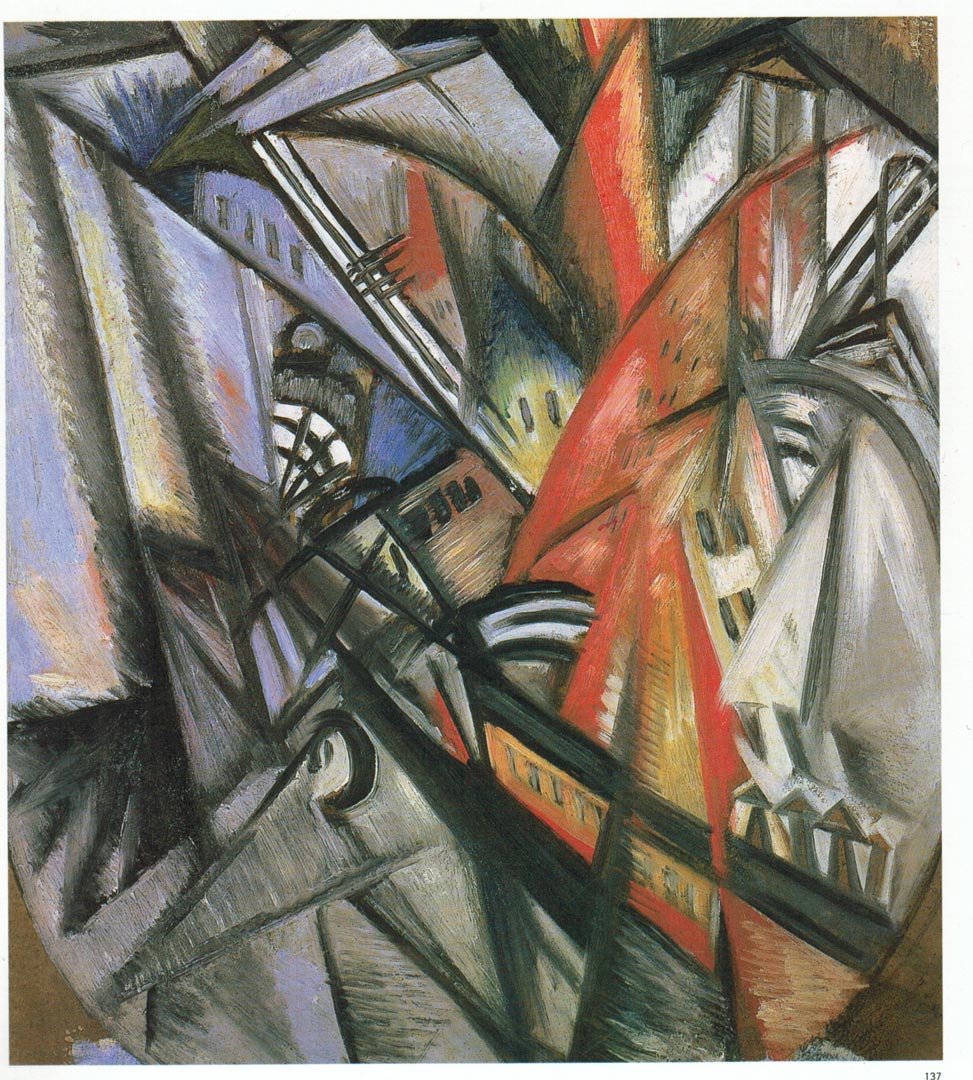 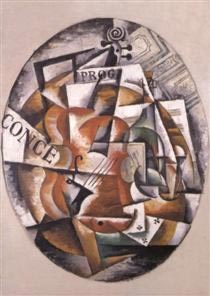